urban shots from the east

Up to the north

Wild flowers were rioting across the boarders. The main artery between Georgia and Armenia barricaded my armed soul. I let the heavy breath of the wind land on my sweaty skin and evaporate my sins. I drained my forgotten dreams over the green valleys of the Debed Canyon hoping that they will last. I sent the swallows to catch the promises that I once blew away. The charming monasteries of Haghpat, Odzun and Sanahin were auscultating my secret desires.  I led my handicapped spirit to heal its wounds inside the chapels of the muddy villages. I let my stingy tears travel through the hanging wires. I set my consciousness on the railway tracks of the rusty future. I put my darkness rest in peace and I pulled my light out of my fist. I indulged myself in reveries. I was free. 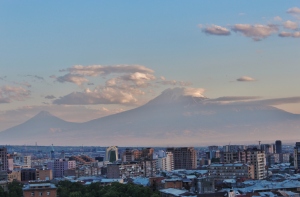 The iced heart of Mt Ararat was searching for the city’s snugness. I could see the buildings from the Cascade standing like scarecrows in the fields of horrors. I could hear the poor sounds of high heels penetrating deep inside my ear drums like thorns of some poisonous wildflower. The women of modernity were making their way out of the dugout of forbidden passions and the sky was raining regrets above their heads- the reconciliation of the universe and its errant souls. The lath-hammer of the night was reaping the thick clouds of uncertainty. The city was naked under the lucid moonlight. A god- fearing muse of vivid passions.

Down to the south

I put on my wings and I did all my way down to the Yeghegis Valley. The vicissitudes of the height were scandalizing my senses. Sweet- sounding sundrops were my shield against the threatening winds. I dived into the flesh of the legendary ancestry to find the monasteries of Khor Virap, Noravank and later on Tatev wrapped inside a fairytale. Their atmospheric magic reincarnated wild legends of kingdoms and conquerors from the past. The untamed heroism of years of architectural tinkering was marked on their variation but their uniqueness was discovered in the frugality of their pure existence. Embalmed into the silence of its valleys the Caucasus fell asleep and so did we. The world turned its back and it never turned back. Our adventure had come to an end.

More photos on our Armenian road trip can be found here.