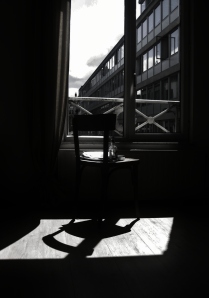 She would stand in front of that big window observing the multiple aspects of street life. She would try to auscultate urbanity pulling her look from one’s static misery to another’s ephemeral happiness. She would think that people appear as found objects on a large stage of different performances. She would then try to look deeper inside their plots and give names to their feelings. She would sometimes match positive facial expressions to negative emotions, in the beginning just for fun, but she would soon realise that she wasn’t wrong in many cases.

That serious looking man would be a child’s father. He would overflow his lungs with screams and he would close his arms to his kid’s dreams. He would remind his son of his rules and objections and he would abolish any of his freedom and imagination. He would talk about a forgotten war and he would support a nation’s fall. He would release pressure by squeezing his fists and he would strengthen his hope by looking at his tattooed wrist. He would once escape the prison of his mind and an empty home would be all that he would find.

That young lady who had reached the sky in her bad quality heels, a modern Cinderella with Dior bag and a body made of diet pills. She would ignore the role she was given and she would waste herself on raising men’s fever. She would be in love with muscles and sweat, she would be a jerk’s bet. Her internal bruises would colour her face, make uped and dressed up she would make her way. She would drink, dance and fuck with a stranger overcoming her fears, she would wake up vomiting beer brimming over with tears.

That youngster with headphones larger than the decibels of his music, a narcissist of drugs and pussies. Big watch, car and fame, small consciousness, dignity and faith. He would fight with his father late in the nights, he would fill in his pockets with a guilt that bites. He would embrace his complexes inside the impossible circle of the one-armed, he would insulate his ears from the buzzing of the mad. He would pave the street for his dreams with a Land Rover, he would soon understand that his oxygen inside the bubble was over.

That punkie with the crazy mother at home would wander in the streets with black eyes and no hope. He would swear to the god of metal his faith and he would trip every night with the rest of his friends. He would fill in the holes of his spirit with smoke. He would fight against the status quo that broke his world. He would paint over walls with an A bigger than his mind, he would consider it the starting point for shaking the public realm. He would burn cars and break windows to be heard, he would jump on his heart and let it scream his regret.

She would pull the curtains and sit back to rest her eyes.

The breathless city with the poisoned lungs and the rotten heart has no more tales, people are on sales.

The society of the spectacle is on rails and the city fails.

cross the line, fly away

It is wider than you think

With its rainbow disco lights fondling the hidden encounter’s eye

It is wilder than you think

With its ghetto fists breathing anger in their lungs

With its street fights taming the stranger’s guts

It is darker than you think

With its shadows crashing down the light of your brain

With its acid sun drops fighting the spirit of the rain

It is falser than you think

With its enthroned spectacle running over its vacant paths

With its nicked beauty dressing its naked hands

It is sadder than you think

With its kids screaming for love and attention

With its seeds rotting from lack of affection

It is crueler than you think

With its shrunken fingers pulling the strings of your deepest pains

With its greedy smiles burying the melodies of your secret games

She is a sadist massaging your crying wounds

You are a masochist watering your rotten roots

She is the substance of your galloping imagination

You are addicted to the opium of your nation

She is the antidote for your broken wings

You are trapped in the magic of your firing strings

She is the revenge of your silent quest

She is the holocaust of your blessed desire

You are convicted for all that you admire

She is the prison of your fragile heart

You are the prisoner of her anonymous art

The city is your home

The snow is innocent and soft and your memory hooked on your heavy pace,
the wind is whipping snowflakes on your chicks imprinting lipstick traces on your face.

Your dark brown hair is pulled like a tattered spool trapped in the nails of some nasty kitty,
the echoes of your cacophonous cries are musing the whole city.

Hanging wires are dancing like playful garlands in a kid’s eyes,
colour-blind paper war swirls around whispering your lies.

Sparrows are haunting the backyard tasting the velvet mould of its tender woods,
abandoned thoughts and rubbish smells are glowing under their dark roots.

The tremor of the pale light is rapping the naked trees,
the dawn is waiting numb out of your window on her knees.